What to Do When Your Bank Won’t Refund Stolen Money 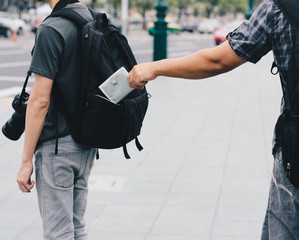 Each year millions of consumers are victims of identity theft, physical theft, and unauthorized money transfers. In 2021 alone, the Federal Trade Commission received more than 4.2 million consumer fraud and identity theft reports resulting in almost $5.9 billion lost. Some situations are successfully resolved over time, but many consumers are not as fortunate. If you have notified your financial institution about unauthorized transactions, but your bank won’t refund stolen money, you may need a consumer fraud lawyer to protect your rights.

One Example of a Bank that Refused to Refund Stolen Money

In October 2021, Andrew O. took a vacation to New Orleans. Unfortunately, while he was there, someone stole his iPhone, debit card, and driver’s license. The physical theft was upsetting, but the financial implications were devastating because Andrew’s financial accounts were accessible through phone apps such as Apple Wallet and Apple Pay. The phone also contained personal information including Andrew’s Social Security number, address, work information, and more.

Although the phone used fingerprint technology and passcodes for protection, the thief was able to hack into the phone and access Andrew’s accounts. The fraudster opened new charge and loan accounts in Andrew’s name including setting up an Apple Cash account linked to Andrew’s Chase bank account. Overall, the thief stole more than $5,600 from the Chase account, almost $1,800 from Andrew’s Zelle account, and charged more than $450 on a Chase credit card.

What to Do After Discovering Unauthorized Transfers

When Andrew returned home, he ordered a new phone and tried to access his Chase accounts, but they were “locked.” When he went to his local Chase branch, he learned the extent of the thief’s actions and how much money was stolen. Andrew gathered all the proof he could, notified every financial entity, and disputed the unauthorized transactions. He also filed a police report and completed an identity theft report with the Federal Trade Commission.

Over several months, Andrew resolved all but one of the fraudulent transfers by supplying extensive written documentation to each financial institution. Chase originally credited the money taken from Andrew’s bank account when he sent several disputes and plenty of evidence to show his account was hacked. However, Chase later changed its position, reversed the credit, decided that the transfers were authorized, and rejected Andrew’s dispute.

If a Bank Won’t Refund Stolen Money, it Could be in Violation of the Electronic Fund Transfer Act

The Electronic Fund Transfer Act (EFTA) is a federal law that protects consumers like Andrew who discover fraudulent electronic transfers. Basically, the EFTA only applies to certain unauthorized electronic transactions in personal financial accounts (not business accounts). If the EFTA applies, consumers can limit their potential losses when they act quickly.

Under the EFTA, financial institutions have certain obligations once they receive notification from an account holder. In general, when a bank is notified about an unauthorized electronic transfer, it must investigate the situation and report to the account holder in a specific amount of time. If the transaction is unauthorized, the bank must refund all or part of the money depending on how quickly the account holder notified the bank.

The EFTA is a complicated law, and most attorneys don’t understand how and when it applies to limit consumer losses. Schlanger Law Group’s EFTA lawyers have extensive experience in this area of law. To help consumers, we created a Consumer’s Guide to the Electronic Funds Transfer Act to explain the complex timeframes and legal requirements involved.

When Chase refused to refund the $5,600 stolen from Andrew’s account after he provided extensive evidence to prove the theft, he turned to Schlanger Law Group for help. We filed a lawsuit against Chase claiming negligent and willful EFTA violations. On behalf of Andrew, we are seeking payment of his actual losses, statutory damages, punitive and treble damages, along with his attorney’s fees and costs.

If you or someone you know is a victim of identity theft, unauthorized electronic transfers, or other consumer fraud, turn to the tenacious attorneys at Schlanger Law Group to help protect your rights. Schedule a free case consultation by calling (212) 500-6114 or filling out this simple form today.