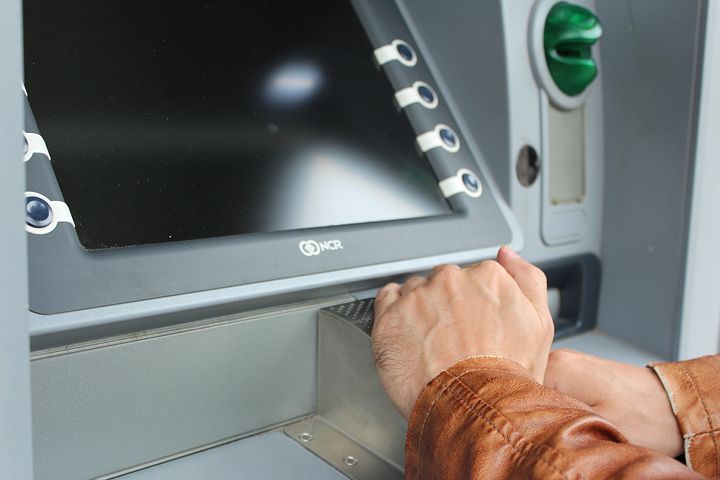 Although online security is rapidly changing, creative identity thieves continue to find innovative techniques to bypass cyber security measures and steal your personal information. In case you’ve never heard of shoulder surfing or bait-and-switch scams, let’s look at how these criminal schemes work, and what victims can do to recover their money.

What is Shoulder Surfing?

Scammers can capture your debit card and PIN without your knowledge in a variety of ways.

One old-fashioned but effective way to obtain someone’s card information is “shoulder surfing”—the act of watching someone enter their PIN to obtain the pin code. For example, maybe someone walks by while you are filling your gas tank and paying at the pump. He casually glances over your shoulder as you enter your PIN. Shoulder surfing has become a common way for thieves to obtain your security code at pay-at-the-pump gas stations and ATMs.

Criminals often use shoulder surfing in conjunction with physically stealing the card or card information itself.  For example, the same person might offer to “help” the victim with some contrived technical problem and, while helping, they take the victim’s card and substitute a fake card without the victim’s knowledge. Or the criminal might write down the card numbers at some point during the “assistance.”   Shoulder surfing of usernames, passwords, account numbers, and pin codes can also occur when the victim uses his or her computer in a public place such as a library or coffee shop.

The Elderly are Especially Vulnerable to ATM Scams and Shoulder Surfing

Rapidly changing technology can be challenging for older generations. They may get confused and become easy targets for identity thieves who just happen to be near and willing to help. Plus, limited mobility or diminished vision can create situations where someone may not notice a criminal spying on their activities.

The team of identity theft lawyers at The Financial Justice Initiative recently brought an action on behalf of an older man who was swindled at an ATM. Schlanger Law Group is proud to partner with the Initiative to provide legal assistance for financial victims around the country. By sharing our client’s story, we hope to help others avoid the nightmare he is facing.

Not All Good Samaritans are Truly Good

Our client, who we’ll call Mr. Adams, is a 78-year-old retiree. In 2019, he opened a checking account at a major bank in California and deposited his entire life savings into his account along with his regular Social Security checks. While on vacation in Mexico, he used his debit card to withdraw cash from an ATM.

He finished his transaction and was walking away when a stranger told him that he “left the ATM transaction open.” Mr. Adams returned to the machine, inserted his debit card, entered his PIN, and reviewed his transaction. Everything looked fine so he withdrew his card—or what he thought was his card—and walked away again.

At that moment, Mr. Adams became a victim of two scams… shoulder surfing and bait-and-switch.

Turns out, the friendly Good Samaritan was an identity thief who tricked our client into leaving his debit card in the ATM and switched it with a fake card. Mr. Adams didn’t know about the switch until he tried to use the card four days later back in California. Also, during the second ATM transaction, the thief was shoulder surfing and saw Mr. Adams’ PIN.

In those four days, the thief used the debit card for several illegal transactions. When Mr. Adams’ card was declined at his bank in California, he checked his account and found thousands of dollars taken from his account along with ATM fees (because the thief did not use affiliate ATMs) and exchange fees because the transactions occurred in Mexico.

Upon realizing the theft, Mr. Adams immediately notified the bank teller about the unauthorized transactions and disputed the charges. He also eventually filed a police report in Mexico. Unfortunately, these actions didn’t solve the problem. While waiting for a response to his dispute, Mr. Adams suffered further losses. In only five days, Mr. Adams lost more than $16,000 which was more than half of his life savings.

In Mr. Adams’ situation, since he notified the bank immediately upon discovering the unauthorized transfers, his potential loss should be limited to $50. However, the bank rejected his dispute claim and concluded the transactions were processed properly and authorized by Mr. Adams. At this point, he had lost the full $16,000.

The bank did not explain how it reached its decision and did not tell Mr. Adams that he had the right to review any documents the bank used to make its decision. We also believe the bank did not complete a reasonable investigation into the disputed transactions. These steps are required by the EFTA.

When Mr. Adams received the bank’s decision, he called the bank and was told the transactions were considered authorized because some of them needed Mr. Adams’ PIN. Of course, the thief stole the PIN as part of the swindle and Mr. Adams did not authorize the activity. But the bank did not care.

Mr. Adams did what was required under the law. The bank, on the other hand, violated the law in several ways and left Mr. Adams in a terrible financial situation.

On behalf of Mr. Adams, Schlanger Law Group filed an action to hold the bank responsible for its EFTA and state law violations. Our goal is to help Mr. Adams recover his lost funds along with payment for everything he has gone through as an innocent victim of this ATM debit card scam.

Also, we have requested treble damages under the EFTA on grounds that the bank acted in bad faith and did not have reasonable grounds to deny the dispute. Under state law, we are seeking punitive damages to punish the bank for the way it treated Mr. Adams. The lawsuit also requests payment of Mr. Adams’ attorney’s fees and costs because companies that violate the EFTA must pay these expenses if the consumer prevails in the litigation.

Whether You’re a Victim of Shoulder Surfing, Bait-and-Switch, or Another Scam, When Your Bank Won’t Help, Turn to Schlanger Law Group

If your debit card, identity, or money has been stolen by electronic transfer but the bank refuses to follow the law, we should talk. Our identity theft lawyers have extensive experience helping victims of shoulder surfing, card skimming, spoofing, imposter scams, and many other forms of criminal activity. We understand what you’re facing and we’re here to help.